The Society has written to key members of the Council expressing our concerns at the proposed Debenhams/St Mary's Wharf Development.  We are not against redeveloping the site but the current proposals don't do justice to the site or Guildford.  A better scheme is required.

Letter to Councilors and Senior Officers

Native Land the developers of the Debenhams/St Mary’s Wharf site are scheduled to be submitting a planning application shortly.  The Society hopes Guildford Borough Council (GBC) can work with the developer to provide a scheme that complements and enhances the Town Centre.  The proposals made public, so far, fail to respect the centre of Guildford.

The Society agrees with Cllr John Rigg (Opinion piece Guildford Dragon) that the site is one of the most important sites to be brought forward for development in Guildford over the last few decades.  Cllr John Rigg highlighted we need a ‘good high quality viable proposal’. The current proposal will do lasting damage to the Town Centre, and we would question its long-term viability.

For a site this significance the Society is disappointed that the council have issued no Brief concerning the development of the site. It is notable that we have far more information on sites included in the Local Plan e.g. North Street, and in many cases far more extensive pre-application discussions e.g. Wisley Airfield. The Debenhams site becoming available has been likely for several years.  The planning department must have developed a set of aspirations for the site, in case of redevelopment. Should be made public?

We would have expected any brief to require specific community and public benefits and percentage of affordable housing as well as specifying the development parameters such as height and floor areas permissible.

We have multiple concerns but will focus on four:

The town centre is of significant historic and heritage interest and value. It contains a large number of heritage buildings which make the town centre and riverside attractive and unique.

A new development on the Debenhams site needs to respect and enhance these Heritage assets.  A major economic draw for the Town is Heritage High Street and surrounding area.  Society volunteers at the recent Heritage Open days were struck by the wide area people had travelled to Guildford to see the town – this is a major opportunity to be fostered.

The current proposals ignore this heritage and will damage it for ever if they proceed.

The current proposal is for two blocks with narrow gap between the two that from most aspects will look like a single block of the same footprint as the existing Debenhams building but twice the height. This is an overdevelopment of this sensitive riverside site. The height will make the building visible from a wide area and overshadow nearby streets/buildings on both sides of the river and the river itself. The projects architects (Squires & Partners) have produced 43 views of the project including the SPD strategic views from many areas in and around the town centre. Many of these show the significant impact a scheme of this height and mass has detrimentally on the existing townscape and urban quality of Guildford as a historic gap town. (See the illustration attached of Quarry Street Impact)

The footprint extends broadly to the existing Debenhams Buildings boundaries which with the height would make Millbrook even more of a canyon than at present and overshadows the riverside.  Public Realm is limited with Native Land unsure if 24-hour access will be provided bringing into question how much is public realm. The riverside walk being offered as part of the project is the same width as the existing but appears to be going to accommodate outdoor catering tables and chairs effectively reducing its width.

The developer refers to the Billings Building as an exemplar for Guildford.  Although Guildford had an industrial area in Victorian times it wasn’t a northern Mill Town!!  Also, it should be noted most Victorian Mill/Warehouse buildings only rise to 4-5 stories.

Guildford doesn’t have robust height or mass policies relying instead on a weak policy Local Plan policy S3 in the Local Plan plus a Town Views SPD. A high building on the St Mary’s site sets the precedent for similar excessive heights on the sites at Millbrook, Millmead and other riverside sites in the town centre masterplan. These will physically and visually separate the riverside from the town with the river in a medium to high rise building corridor.

Despite the Architects (Squires & Partners) making claims to have analysed and been influenced by key existing Guildford buildings and townscape, the design palette they are using is virtually identical to that used in their Paddington scheme (see attached images) which Westminster Councillors rejected because of its height, damage to heritage and conservation areas, lack of sunlight and single aspect with some apartments. Also, their design for Mortlake Brewery uses similar principles and has been rejected by the Mayor of London partially because of affordable housing percentage but also “The increased height and density of the scheme around the historic Maltings building in an important riverside location would also have a negative impact on the open spaces in the area. Despite the hard work of the Greater London Authority (GLA) team, the public benefits offered would not clearly outweigh the harm to the surrounding heritage sites and riverside views.”

Guildford has a heritage of high-quality buildings, based on a rich heritage of design that goes back through architects such as Lutyens, Voysey, Maufe, and Shaw. In recent time we have had good architecture provide by Grimshaw and others at the University, the ‘Steamer Trading building’ in the high street, and the new Crematorium. Guildford needs to demand architectural excellence for a building on such a significant site that is likely to be in situ for over 100 years.

We would expect pre-application consultations have taken place with bodies such as Design Southeast, Historic England, National Trust, and any other advisors that GBC has consulted. For an application of this significance this information should be in the public realm during this consultation stage. GBC has promoted transparency with its decision making and this information should not be kept secret.

On a site of this importance viability needs to considered not just in terms of the short-term profitability for the developer (Note the BBC recently reported the Site was being developed as a Build to Rent scheme); but is it viable for the town and community in the longer term.  We would urge the council to consider:

The Society believes the Council should be requesting that Native Land rethink the scheme to respect the Town Centre, provide more public and community gain, and be designed to enhance the town and riverside.  We do wonder if the development is being bought forward at speed to avoid being subject to a ‘Protected Area’ status under the Planning for the Future Proposals. The site should be developed in the context of proper Town Plan and not approached on an isolated site basis. 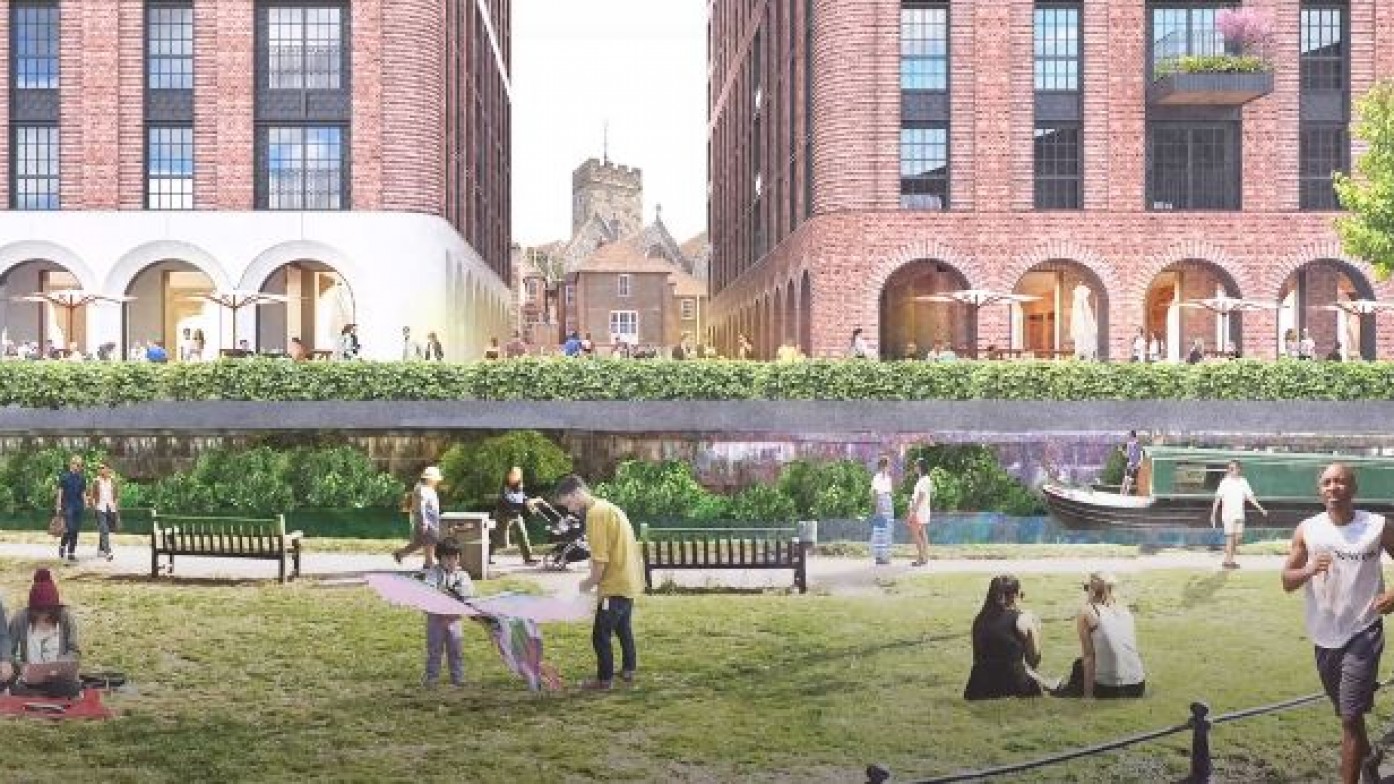 St Marys Wharf - Second Consultation -Th... View article Native Land, have now who have acquired the Debenhams site, have now issued an interim update on their emerging ideas.  The site has been renamed as St Marys Wharf. The update, which is available for comment until the 21st May, builds on the ... View article 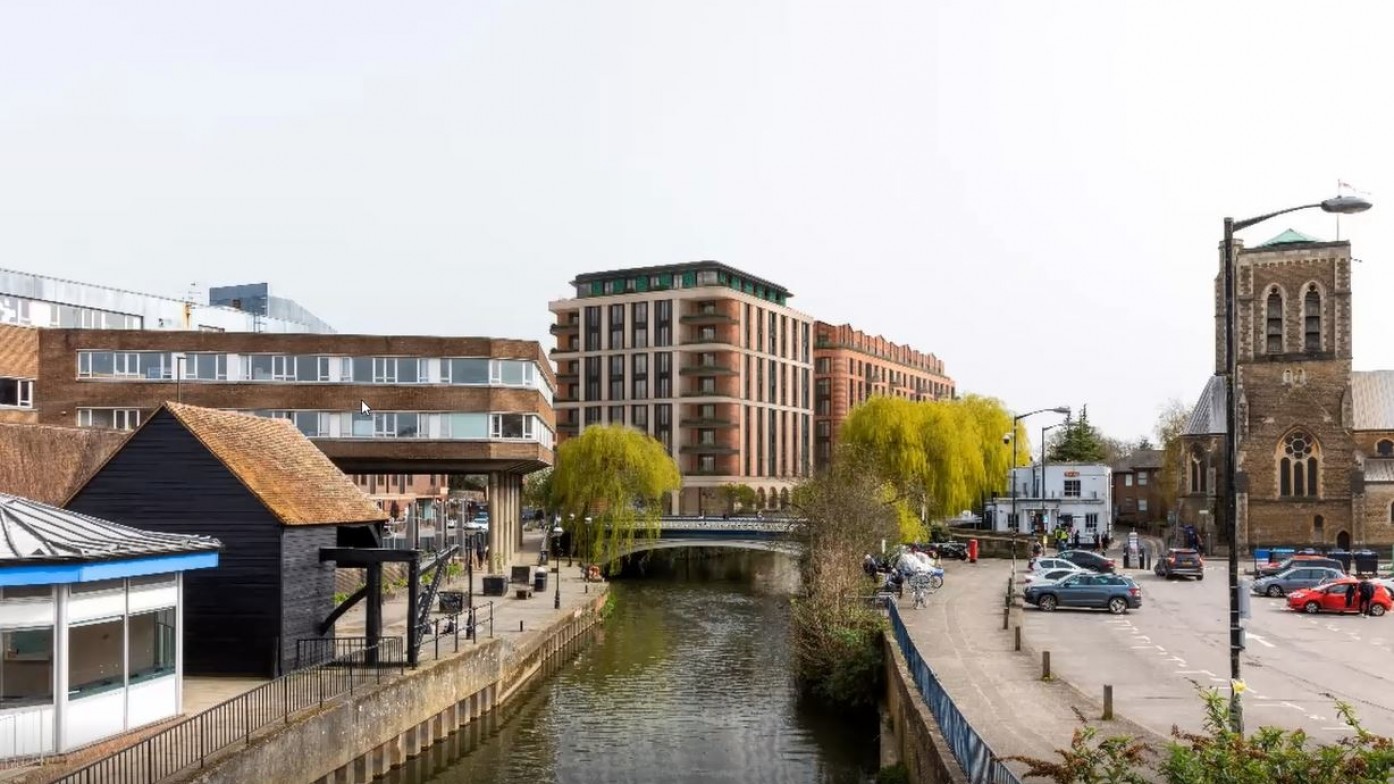