The Guildford Society has not, as yet, read and absorbed all the details on the Weyside Application.  We will update this page as we consider the documents further.

The Society accepts that the Weyside Scheme is part of the local plan and that the site is scheduled for development.  The Weyside site, if well designed and enabled by proper infrastructure provision, has the potential to be a valuable addition to urban housing in Guildford. We do need to get this development right!!!

We will be examining the proposals for this important site in more details over the coming weeks. We have identified several areas where we believe issues have not been fully addressed and on which we will seeking clarification and answers:

The scheme depends upon the SWT being relocated to the north of Slyfield whilst meeting cost and time parameters.  The relocation may require expensive measures to contain waste material during demolition, and on an ongoing basis.  The documentation provided shows extensive surveys have taken place.  However, the relocation must still be considered a major risk factor to the viability and timescales of the project.

The SWT is planned to provide addition capacity of 2500 dwellings.  This capacity could be easily used up by planned developments related to the local plan.  It is unclear what plans are in pace to extend the SWT further.

The parkland between the Wey and the A3 is a much-used local facility.  During the consultation process residents argued that the North Bank of the Wey was an intrinsic part of this green space.  This was recognised in the Strategic Development Framework (SPD) published by GBC and agreed in 2020.  The latest plans show that the spine road through the site has been altered which narrows the green border to the Wey.  This appears a retrograde step for which no explanation has been given. 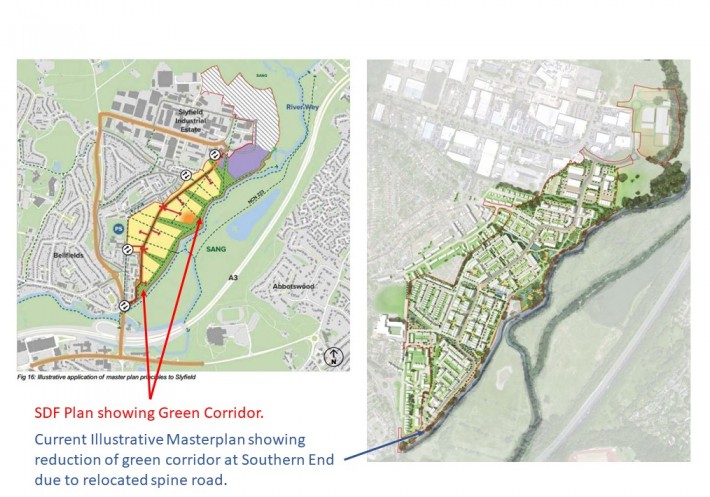 The developers have produced design proposals for the site which provides outline of the mass and scale for the site and proposal for a variety of Architectural treatments across the site.  This is to be welcomed.  We are concerned to get more detail on the following:

There is no discussion on standards for the internal design of dwellings e.g., minimum sizes, storage etc.  In a post-COVID environment adopting the very poor government standards for space is not acceptable and Guildford should aim for better standards.

The Weyside development had a increase in housing numbers adopted from 1000 to 1500 dwellings during the Local Plan process.  This poses the danger of the site being overbuilt with small dwellings crammed together.  It is unclear that the current proposed design avoids these dangers.

Substantial areas of the site are taken over by parking spaces.  A modern development being built from scratch should be able to provide for cars by use of basement levels or even a couple of small MSCP’s.  There are plenty of examples where cars are effectively tucked away, and land released for community use.

Weyside depends on having an effective transport network for all modes of transport.

Our comments are made against a background of Guildford having a road network that lacks any resilience at peak times, in particular the Woking Rd is frequently congested (A indication of this is that Car Dealers in Slyfield offer courtesy bus transfers to Woking not Guildford in peak times!).

We consider the proposed arrangements for the improvements to the A3 Ladymead Junction and the southern access to the site to be inadequate we have issues with:

Managing a very complex multipart development over a period of 10plus years is a risky endeavour particularly when the ultimate customer is a local council with changing political complexion, and in Guildford’s case likely integration with other authorities.  Does consideration need to be given to Weyside being part of a ‘micro-development corporation’ to preserve a management strategy and team over the longer term.  The dangers of having an incomplete development satisfying nobody are considerable.