Debenhams is situated on a key site just to the south of the Town Bridge on the river Wey. 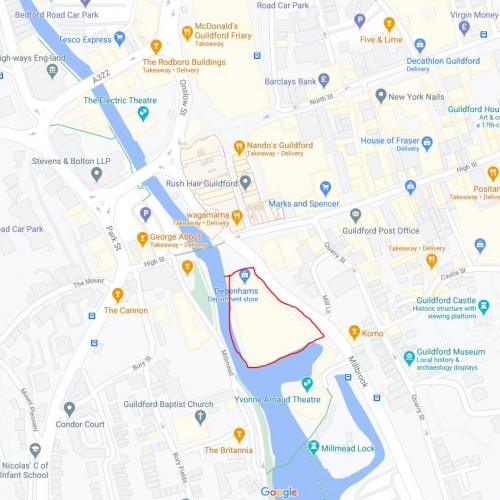 An opportunity to re-shape the town?

The Debenhams site is not covered by a policy in the Local Plan but is included in the development of the Guildford Economic Regeneration Plan, which encompasses a Town Centre Masterplan, commissioned by GBC.

The Debenhams store has been in financial difficulties for some time, and have annouced the closure of the store in 2021.  The owner of the site M&G have been marketing the site, having decisded not to re-let or redevelop it.

Native Land, have now aquired the site for £20m and judging by their statements have energy and ideas for the Debenhams Site.

“The Debenhams department store in Guildford is a perfect opportunity to unlock the potential of land and buildings, to revitalise urban neighbourhoods. This is especially relevant to town centre locations, where repurposing bricks-and-mortar will ensure sustainable futures. Guildford is an affluent town which is also benefitting from the growing trend in living outside London and working from home.”

Native Land have focused, to date, on building luxury residential schemes in London.  The modern flats, NEO Bankside, behind Tate Modern are probably the best known. Native Land have produced a range of high-class modern buildings employing eminent architects, so we await their proposals with interest.

We are glad to note that Native Land will explore a range of future development options for the asset, including homes for sale and rent together with mixed retail and commercial to unlock and enliven the river frontage. It aims to deploy its experience in delivering world-class places, to further enhance Guildford’s town centre offer.

The Society believe that the site represents an opportunity, well located by the river, to provide for a Community Multi-Use facility that would help maintain the vibrancy of the Town Centre in the environment where retail needs to be supplemented by other attractions. This use doesn’t preclude dwellings being built on the upper floors.

See our ideas that we published in the summer 2020

The Debenhams site is difficult as it lies in Flood Zone 3A which will require an innovative approach to allow, in particular, residential to be built.

Another Town Centre Site - a Challenge for the Council

Large Areas of the Town Centre are becoming subject to redevelopment, North Street, Debenhams, House of Fraser, conversion of Retail to other uses; in addition, we have the Plaza Site and ongoing discussion on the Casino Site. The need to have at least a draft Town Centre Plan FAST to guide how the centre will evolve is critical. The Town Centre Master Plan is in danger of being too late.

Currently the Town Centre is covered by a series of weak policies, particularly Policy S3, and there is as result, little limit on scale and height.  The Views SPD appear to provide little protection to the Debenhams site.  Rumours persist that one developer could only make Debenhams work by building to 20 Stories!!!

To make the best use of the Debenhams Site, and aid the Developer, it requires a clear brief from GBC that integrates with other developments in the Town Centre.  Housing is recognised as an issue in Guildford, but housing brings with it the need for Employment, Health Leisure and Education Facilities etc.  We must get out of the cycle of ‘point developments’ scattered within Guildford.

The redevelopment of Debenhams site is a challenge for GBC as well as Native Land.

The Society looks forward to contributing our ideas for this vital site.